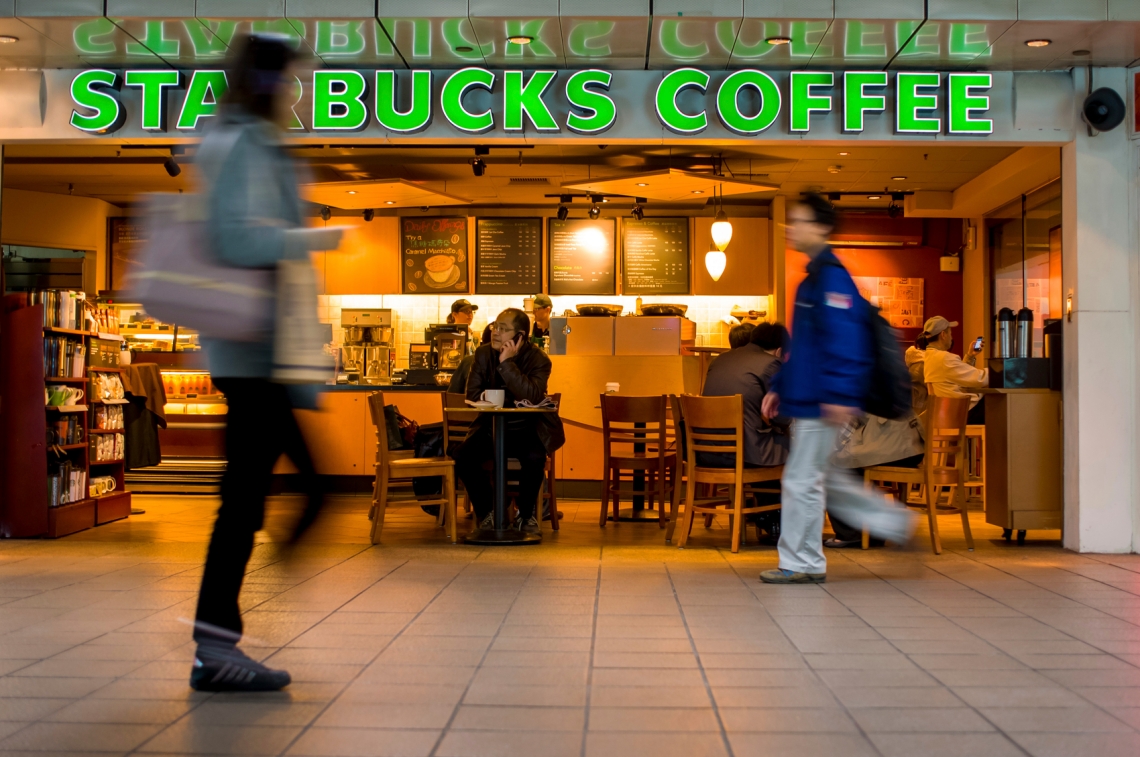 It’s been a week. The world is still spinning. The laundry is still piling up. The fridge needs restocking. And, client deadlines didn’t go away.

The election is over and we now know that some of our friends and loved-ones chose Trump.

Does that have to mean that they are not who we thought they were, at their core? We have a choice to make. Are we going to participate in hate acts that we so strongly denounce? Are we going to tell them there’s no room at the holiday table for their worldview? Are we going to officially un-friend them on Facebook? In some cases, the answer is a resounding YES. In others, it might behoove us to take a closer look.

It’s been said that we are all a sum total of our experiences. I will never be a Muslim woman or a transgender man. I’ll never worship Buddha or be able to understand the plight of the sex-trafficked teenager. I can read books, talk to people, form opinions… which, by the way, seems to change the more I read books, talk to people, and form opinions. (Anyone else have that happen?)

Opening the Door to Tolerance…

In recent days, many journalists have had to eat crow and admit that everything they thought about politics is now completely out the window. Don’t cast stones – many of us were flying in on the same plane, headed for a different landing.

Last Friday, I watched Meet The Press (I kind of have a political man-crush on Chuck Todd. Don’t judge me.) Chuck had Chris Clayton, an agricultural policy reporter on his show. It was a smart move, on Chuck’s part, because his viewers – like it or not – need to somehow figure out how to move on. The best way to start that process is by inviting a wider range of people, with differing views, to the discussion table.

I found Chris Clayton to be extremely level-headed and very eager to help those of us on the “other side” better understand our Trump-supporting counterparts. To watch the segment, click here. It’s well worth the 8 minute investment of your time.

My take-a-ways from the segment were threefold.

Trump’s campaign met mid-America where they were. His team visited the Heartland with a message of hope and prosperity. To those with farms or living in rural America, he discussed issues that were top-of-mind like water rights, land rights, oil rights, gun rights… For many people who earn (or previously earned) their living working the land, processing oil, or working in factories – the Trump message was one of hope.

Don’t get me wrong, they also heard about his indiscretions. However, most were focused more on their lost jobs, lost wages, and the growing perception that they were losing everything they grew up believing was American.

Meanwhile, their airways provided a dog and pony show including a “Crooked Hillary” laundry list with hours of justification to that end.

Over the past several decades, Democrats (and Washington) have overlooked this growing voice of concern. On November 8, 2016, this collective voice rallied far and wide. They fought for their right to be heard. Like it or not, it is our time to listen.

Yes, the result of this election will also spill over into what we hold dear: environment, human rights, and other social issues. And you know what? It’s okay. They have a right to believe how and what they believe. They are a sum total of their experiences.

Our democracy allows us to disagree. Veteran’s Day is a good reminder of this fact. (Moment of silent appreciation to all Vets and their families who have made, and continue to make, the ultimate sacrifice.)

Second: Technology has empowered us to deepen our limited worldviews.

Since we are a sum total of our experiences, we tend to seek out information about things that are familiar to us. We can hear from a wide range of similar voices, and choose to ignore other opinions – even if we don’t realize that we are making that choice. (If you don’t believe me, read up on how social media and search engines use our selections to frame ads, newsfeeds, and other blurbs that pop up each day.)

Some of us may abhor everything that Trump stands for. However, I think we can all agree that he is a marketing genius.

If you are choking on my use of “Trump” and “Genius” in the same sentence above, please let me explain… (Good segue to my 3rd take-a-way)

Third: Trump is a Marketing Genius.

I am a marketing person and when I was working on my undergraduate degree, there was a whole section on the genius of Starbucks. It’s a classic marketing case-study which points out that Starbucks took a .25 cent cup of coffee and turned it into a $5 buck experience. Some people were outraged. And, it changed an entire industry, seemingly overnight.

I believe that Trump was spinning two effective and powerful messages concurrently. Those on Camp Hillary were so focused on his message to us, that we missed what he was saying to the rest of the country. It was a 50/50 A/B split. (Marketing lingo) And you know what? He rocked it, folks.

While we were busy being barraged with 3 a.m. tweets, racist comments, offensive gestures, and other forms of unacceptable rhetoric – we took the high road. After all, “When they go low, we go… HIGH!” Yup, we fought a good fight for social justice, with the intent of giving those without a voice a platform to stand on. The problem was, we never saw or allowed ourselves to truly listen to what he was saying to the rest of the country. I firmly believe that Donald J. Trump hangs his hat on the philosophy that “there’s no such thing as bad PR”. Don’t believe me? Check out Hillary’s ad spend vs. Trump’s. Checkmate.

Meanwhile, mid-America… those listed above, as well as, 1st or 2nd generation Americans whose family fought hard to take a legal path to citizenship, may have been listening to Trumps message on “Making America Great Again.”

For example, talk to the construction worker who has the last name Gonzales and is a 45 year old registered Republican. See how he feels when Democrats send a Spanish speaking Hillary supporter to his door, assuming that his language of choice, will win them the vote. His surname does not dictate his education level or worldview. No one really took time to ask. We were too busy knocking on doors.

Or, talk to the property owner who thought they were renting to a family of four and later found out that 10 illegal immigrants were also living in their 3 bedroom rental. Immigration reform looks very different from where this landlord sits. I think we can all agree on that.

I lay all this out, as if to say, we must stop judging the other side. America has spoken, and it’s time to phone (or text) a friend and begin rebuilding together. After all, friendship has its benefits.

I had dinner with a Trump-voting friend last night. It was a fabulous exchange and I believe we left our meal with a better understanding and appreciation for the democratic process. She, a republican, believes in women’s rights, marriage equality, and when asked if she gloated after the election replied, “Gloat?! Never! Donald Trump won. What’s to gloat about?” However, the topics listed above really resonated with her 2nd generation mid-American family.

If you haven’t opened your heart to reaching out to someone who selected the T instead of the H, I challenge you to pick up the phone and schedule a coffee or dinner. (Starbuck’s anyone?!)

Sometimes, in our technologically advanced world, we forget that we are all humans…searching for our place in this universe… each with a unique set of circumstances. Allow yourself to find common ground, remember your similarities, and work together for meaningful change.

Along the way, take care of yourself, speak your truth, and take time to breath. Every.day. Sometimes it is okay to disagree.

In closing, here’s a meme I saw on Facebook that seemed especially appropriate: 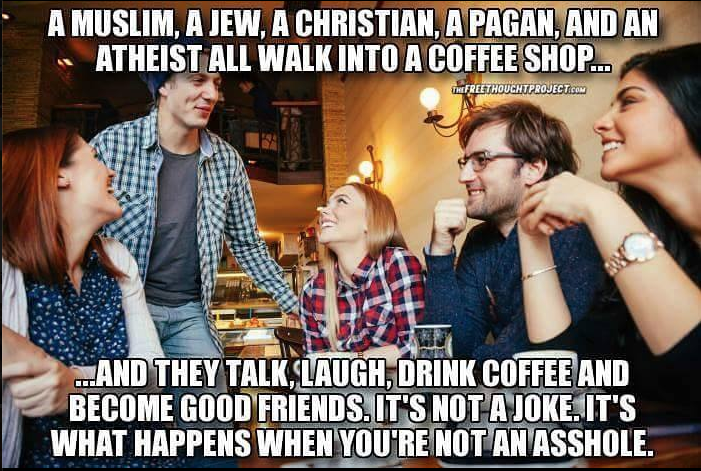 No matter what anyone says, there is more that unites than that which divides.